It was in Liam Flynn’s Alehouse on North Avenue in Baltimore City that Sgoil Gàidhlig Bhaile an Taigh Mhóir got its start – three students, including Liam, and our teacher, Scott Morrison, who drove in from Howard County to teach. Liam’s pubs, the Alehouse and O’Flynn’s in south Baltimore, were centers for Celtic life in Baltimore; new pubs built on the traditions of old pubs. Thought by many as the best publican in Baltimore, Liam is now back on the water in his original life as a mariner.

RG: What brought you to the study of Gaelic? Tell us a little bit about yourself and your journey into Scottish Gaelic. How does it fit into the story of your family and your personal experience and identity?

LF: My early experience with Gaelic was limited. My mother studied Irish Gaelic due to our family being Irish & Scottish on one side and Scottish & Irish on the other. It sadly was not passed on to us children. My first direct experience with Gaelic was from when I worked on a fishing trawler out of Castletownbere, Co. Cork, Ireland. The local fisherman like to use Gaelic when speaking to each other on the VHF radio. That way the other fishermen from other countries could not understand them. I always found it humorous that all the fishermen at that time were from Celtic nations working the Celtic Sea. The languages are somewhat similar anyway. For example, Irish: An Mhuir Cheilteach; Welsh: Y Môr Celtaidd; Cornish: An Mor Keltek; Breton: Ar Mor Keltiek; French: La mer Celtique and so on.

My start with learning Gaelic came from picking up language books at the Gaelic Language Centre in Dublin. This didn’t lead to much because I returned to the U.S. and started working on tug boats in San Francisco. The Irish community there had limited opportunities for beginning students. I did enjoy some limited Gaelic banter at one of my favorite haunts, the Starry Plough Pub in Berkeley. In the East Bay, I had a international music show on Free Radio Berkeley that featured many Gaelic language musicians in the early ’90s. Just a side note, my show was the first-ever broadcast using live-stream. It was in its beta version and the developers needed a platform to sample it on. They received messages from all around the world. So you could loosely say , Gaelic language music is one of the first to be broadcast by live-stream across the world. I think one of the songs I played was Sinead O’Connor’s Oró, sé do bheatha abhaile and Sting’s Mo ghile mear. Very progressive stuff. 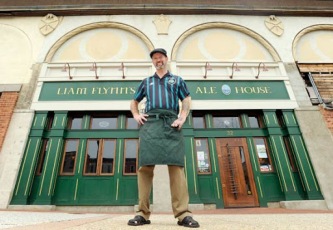 I joined the Sailors’ Union of the Pacific and they sent me to work on ships out of the Port of Baltimore. After a few years of that I settled into Baltimore City and opened Red Emma’s Bookstore & Coffeehouse with friends. Needing more money, I went into the pub and restaurant business. Both the venues brought me closer to the Irish and Scottish communities of Baltimore and Maryland. I joined the Saint Andrew’s Society of Baltimore and the Ancient Order of Hibernians Local 5 Branch. One of my businesses was Liam Flynn’s Ale House. This public house featured traditional Celtic music sessions, food, and events. I was approached by yourself, Rick Gwynallen, and Scott Morrison about hosting a Scottish Gaelic group. I jumped at the chance.  I loved having the classes at the pub, but we moved online and that was a very wise move.

Membership is up and it has allowed the school to evolve. I have a son, Lachlan Aengus, that attends a Gaelic play group at the Furan Gaelic Centre in Oban, Scotland. It is my hope that when my son returns to live in the United States, we will both be very active in the school.

RG: Have your perceptions of the world and outlook changed as you walked down the Gaelic path?

Yes, learning Gaelic has opened up the beauty of learning languages to me. As a mariner, I have had a pretty worldly view. Taking the time to learn the language and steep yourself in the culture is a mind expanding experience.

RG: How might a knowledge of the language for a person of Scottish or Irish descent inform their understanding of their heritage and ancestors? Why should that matter to them?

Understanding your roots is to understand the fiber of your existence. It has been said, ”Think for a moment – how many struggles? How many battles? How many difficulties? How much sadness? How much happiness? How many love stories? How many expressions of hope for the future? – did your ancestors have to undergo for you to exist in this present moment?” The Gaelic language and culture was forcibly suppressed. It is the current and future generations that can ensure that all that life, art, beauty, and knowledge will not be forgotten.

RG: Do you think that it’s important for students of Gaelic in North America to contribute to the efforts to sustain Scottish Gaelic in Scotland and to support causes that contribute to aspects of life in Scotland, just as land reform and conservation?

There is a lot of Gaelic history in North America, not just in Nova Scotia. The immigrants that helped build what we know as modern North America contributed a lot, both good and bad. The Scottish especially blended very well with the Native Americans in some areas. Take for example, the Bungee language in Canada is an English dialect spoken by the Métis people that was influenced by Scottish Gaelic. The Clan system that still existed in Scotland translated very well for the ancient tribal system in the North America.

Historically, Scotland is a country that has spawned many great inventors, engineers, thinkers, and so on. Today, Scotland is a very progressive nation and has a lot of democratic, farming, alternative energy, and educational practices we can learn from.

RG: Has interest in Gaelic in the Chesapeake grown in recent years?

Thanks to the internet and Celtic festivals/Highland Games, the Chesapeake Region has seen a growth of interest. Much of the local ancestry is Scottish, Irish, Welsh, Cornish, and Breton. Now that there is peace in Ireland, people feel free to explore and rebuild the Gaelic and Celtic culture without political stigmas. This translates to North American descendants as well. Now that there is access to schools, online classes, internet podcasts, radio programs, BBC-Alba television programming, cable television series, chat lists, printed literature, immersion weekends, and cultural festivals the language is seeing a revival.

RG: What do you see as important in fostering growth of Gaelic learning communities in the Chesapeake area?

It is important that people understand that learning a second language is healthy for the mind, just as much as physical exercise is to the body. English is the official language of the United States and the Chesapeake Region. Sadly, we have lost a lot of the native languages from this area. We have access to Gaelic and it has a history along the Chesapeake. We should not lose this. Gaelic can be a source for community and education. There are already something like eight to ten annual Celtic Festivals in the Mid-Atlantic Region. These are some of the best ways for outreach and participation in learning.

RG: Share with us some of your projects and interests.

Currently, I am working on setting up an online, crowd source funding for Sgoil Gàidhlig Bhaile an Taigh Mhòir. We need a tent for our Language Village project. This project is a great way to offer an interactive area for all ages to learn Gaelic language at events. I am also a Board Member for the school. I hope we can expand and help promote a beautiful language and promote an ancient culture that is still relevant today. I think honoring different cultures helps people identify with their heritage. Diversity and verity in our planet is the spice of life. 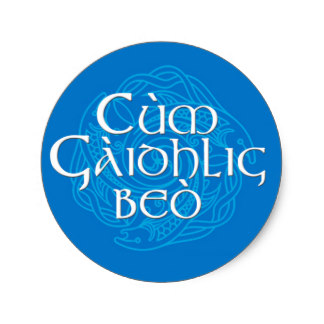