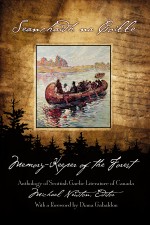 Facing Our History looks at the impacts of colonialism on the Scottish Gael, and their complex responses to it.  That requires that we hear from the Gael in his or her own words.  In this context, Dr. Michael Newton has provided us with a landmark work.

Scottish Gaelic settlement in North America included significant communities in Georgia, North Carolina, the Mohawk Valley of New York, and in wide ranging areas of Canada, including the last remaining area of Gaelic communal activity, Nova Scotia. Despite such a broad presence in North America, Gaelic source materials have not been well researched. Seanchaidh na Coille | Memory-Keeper of the Forest brings to light the Canadian experience of the immigrant Scottish Gaels in their own words. This bi-lingual anthology of Scottish Gaelic literature of Canada spans the eighteenth, nineteenth, and early twentieth centuries. If that sounds like a huge undertaking, it is indeed, particularly in light of the fact that most of the translations were by Newton himself.  The sheer breadth of the material might be an achievement unto itself.  However, the book is of more consequence than simply as an anthology. Through the breadth and depth of the material provided, Newton allows the reader to strip away the layers of formal history that buried the voices we read herein, histories written often by the Gael’s enemies and those who found success in assimilating to British Imperial structure and culture.

It is a commonplace statement that “the winners write the history.” In his conclusion, Michael Newton quotes from Linda Tuhiwai Smith’s seminal 1999 work on the intersections between colonialism and the methodologies of scholarly research, Decolonizing Methodologies.  Smith underscores the “negation of indigenous views of history” as “a critical part of asserting colonial ideology”. She describes history as “mostly about power. It is the story of the powerful and how they became powerful, and then how they use that power . . . to dominate others. It is because of this relationship to power that we have been excluded, marginalized and ‘Othered.”

Seanchaidh na Coille | Memory-Keeper of the Forest strives to do no less than help break the hold of colonial ideology on the history of the Gael, and lift these voices from exclusion and marginalization.

While one might fully expect such an anthology to include the song and poetry so central to the Gaelic literary tradition, Newton has also included here letters, memoirs, articles from newspapers, public speeches, and even excerpts from guidebooks providing advice to the emigrant.

The thematic layout of the chapters takes the reader down the rough waters experienced by the Scottish Gael through “The Subjugation of Gaeldom’, “MIgration”, as they left their homelands, and “Settlement”, as they became inhabitants of a new land, in this case Canada. Along that river, Newton lets the Gael speak to us in regards to universal subjects such as “Love and Death”, their particular experience in creating new institutions in Canada in “Identity and Associations”, and experiences unique to the Scottish Gael, as their warrior tradition became entwined with “Militarism and Tartanism”. Gaelic voices speak of “Religion” and “Politics”, and Newton explores “Language and Literature”.

Referring back to Smith’s statement that “history is mostly about power”, we might expect to hear in the voices of these Gaels denunciations of the crown, or the English, but we often find a more sophisticated understanding of power relations.  In the chapter, “The Subjugation of Gaeldom’, the voice of Coinneach MacCoinnich, reaches across the centuries to us in his 1786 song-poem, “The Lament of the North”, describing the class and power relationships at play in the Highlands and laying the blame for the oppression of the Gael and the resulting mass emigration squarely at the feet of the landlords. (pp.52 – 59)

In the “Migration” chapter, Anna NicGill-Iosa beautifully expresses the conflicted feelings of an emigrant and draws upon the heroic tradition to transform emigration from simply defeat to a confident, optimistic migration. Her praise of the land they were leaving draws an intimate link between the land and the people, and we detect both hope and uncertainty. (pp. 129 – 132) Just following Anna’s song-poem, we hear Iain Liath MacDhomhnaill bear witness to the early Glengarry migration and mourning the death of a culture and people. We hear the initial excitement of arriving in a new land quickly end. (pp. 132 – 138).

When settlement occurred it was accompanied by mass clearing of forests, cutting and burning, treating the forest as an impediment, and even harboring danger as the lair of wild beasts. However, in Lachlann MacMhuirich’s mid-19th century poem in “Settlement” we find a critique of burning the woods to create open space for cultivation and home building. He  describes a fire out of control, but he seems to go even further, suggesting a broader sense of kinship, as he spends much of the song-poem focused on the damage done to wildlife. Newton introduces this poem with other Gaelic commentators from the early 20th century lamenting the loss of forests as a result of settlement. (pp. 215 – 219)

As I mentioned, song-poems are far from the only literary forms Newton includes. Seumas MacCaluim’s reflections contain extraordinary detail on the experience of migration and settlement, and the importance of kinship networks to the Gael. (pp. 154 – 161)

We see old Gaelic forms carry over into new circumstances, such as the old panegyric tradition being taken out of the aristocratic or warrior order and adapted to modern politics or people engaged in other forms of valiant behavior. And there is the presence of the tree and forest, so important in Gaelic cosmology and poetic traditions, appearing in the literature of the immigrant Gaels in a new land.

In each of these chapters, Newton provides an extensive introduction, and an analysis of the literary examples and their historical context. More than a collection of poetry, Seanchaidh na Coille | Memory-Keeper of the Forest provides substantial background information on the political, socio-economic, cultural, and literary contexts of the material being presented, and places the experience of the Gael within the wider context of their homeland and the new country of their settlement. In so doing, we are able to access the complex attitudes that developed amongst the Scottish Gaels as they experienced colonization, oppression, disenfranchisement, and exile in the Gaelic diaspora.

Whether the reader has a personal or professional interest in Scottish Gaelic history in North America, Seanchaidh na Coille | Memory-Keeper of the Forest will help re-think that history and rescue the real experience of the Scottish Gael in Canada.

Click here to return to the Facing Our History Home Page