Posted on June 7, 2019 by SgoilGàidhligBhaileanTaighMhóir

On a spit of land at the narrowest part of the Chesapeake Bay in full view of the Calvert Cliffs, an intentional Gàidhlig-speaking community formed for a late spring weekend.

Gàidhlig san Taigh-sholais had three purposes: Building Gàidhlig language skills, Gàidhlig thinking, and Gàidhlig community.  Take a look at scenes from the weekend. Twenty people spent a weekend at Cove Point Lighthouse on the Chesapeake Bay immersed in Gàidhlig. This was the first Gàidhlig language weekend in Southern Maryland.  It was organized by Sgoil Gàidhlig Bhaile an Taighe Mhòir and Gàidhlig Photomac – two regional Gaelic Learning Communities – and sponsored in part by An Comunn Gàidhealach Ameireaganach (ACGA).

Our little ad hoc community had a wide range of experience with Gàidhlig, from beginner to fluent, and came from a wide range of places, from Virginia to Vermont.  Yet, bonds were quick to form and at the end everyone felt they had experienced a real sense of community.

The community members learned together, sang together, ate together, and, yes, cleaned together. The willingness to participate in the daily tasks needed to make the event work was extraordinary.

The maritime setting was incomparable. 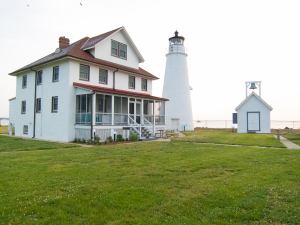 Friday night opened with waulking songs, òrain-luadhaidh, and a Gaelic language game labeling items in the environment with their Gaelic name. By the end of the night everyone had eaten together, sung together, and worked together to solve the challenge of the game.

There was music everywhere and at all times.

In the living room

The céilidh was remarkable

Iain MacHarg, down from Vermont, on the Great Highland Pipes

How many times at a céilidh have you seen a didgeridoo (if ever), let alone in a stirring duet with a Celtic harp? Many thanks to Scott MacIlleMhoire on the didgeridoo and Maraji Gwynallen on the harp!

There were many more songs, stories, and poems shared at the céilidh than could be displayed here. Suffice it to say that the night, like the weekend, was inspiring.