A’ mairsinn beò – A Review of the Year at Sgoil Gàidhlig

Posted on July 2, 2019 by SgoilGàidhligBhaileanTaighMhóir

As the saying goes, time has flown by.  It doesn’t seem that long ago that a group of three met at Liam Flynn’s Alehouse on North Avenue in Baltimore City to learn Gàidhlig from Scott Morrison.  Yet, here we are now with a fully incorporated organization and a solid body of students.

The past year has been a busy and productive one. Sgoil Gàidhlig incorporated in the State of Maryland in August 2018 and recently received 501 (c) (3) tax exempt status from the IRS.  It feels like we are adults now. We have survived our organizational childhood, grown and learned, and seem to be making a more mature contribution to the survival of the Gàidhlig language (a’ mairsinn beò). 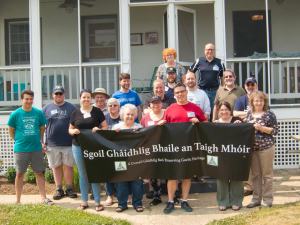 On the 31st of May through the 2nd of June we held our first immersion weekend, Gàidhlig san Taigh-sholais, in cooperation with Gàidhlig Photomac, which was so successful that we intend it as an annual event, perhaps even expand the program. There may be more to announce in this regard after our July Board of Trustees meeting.  It was an honor to host so many committed and loving people.

Sgoil Gàidhlig started floating a Language Village concept to area Celtic festivals whereby we create a space in the festival devoted to speaking and learning Gàidhlig, as well as incorporating other Celtic languages when those language communities are interested in partnering in the Language Village.  Some interest has been expressed in this concept and we will hold our first Language Village this August during the Celtic Weekend at Historic London Town and Gardens in Edgewater, Maryland. This will give us the opportunity to test out and refine the concept. We hope more festivals will incorporate the Language Village into their festivals during next year’s festival season. 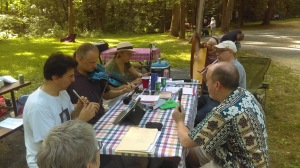 We have also amended the schedule and format of our céilidh series.  With as many classes as we now

run and the addition of the immersion weekend this year we no longer have the capacity to hold a céilidh every six weeks. In truth, it was always a stretch. So, we have changed the schedule to hold a quarterly céilidh, and are designing them to be mini-immersions.  The program for each céilidh is designed to teach Gàidhlig in context, such as our Còcaireachd anns a’ Chidsin (Cooking in the Kitchen) session and our hike along the Potomac, build conversation, share more songs, and hear more offerings of music, poems, and stories.

Lastly, the first year of Sgoil Gàidhlig’s new curriculum has concluded, and we are happy to say that the new curriculum has worked very well.  Assessing the last year of classes and making adaptations will continue through the summer, but we are now taking registrations for the 2019 – 2020 academic year.

All of this kept us so busy we did not make it to festivals as of yet this year.  We regret missing the festive gatherings and meeting those who come to our tent. Hopefully, we will see many of you soon.

Would you like to join us on this journey?
Click here for information on learning Gàidhlig with us.